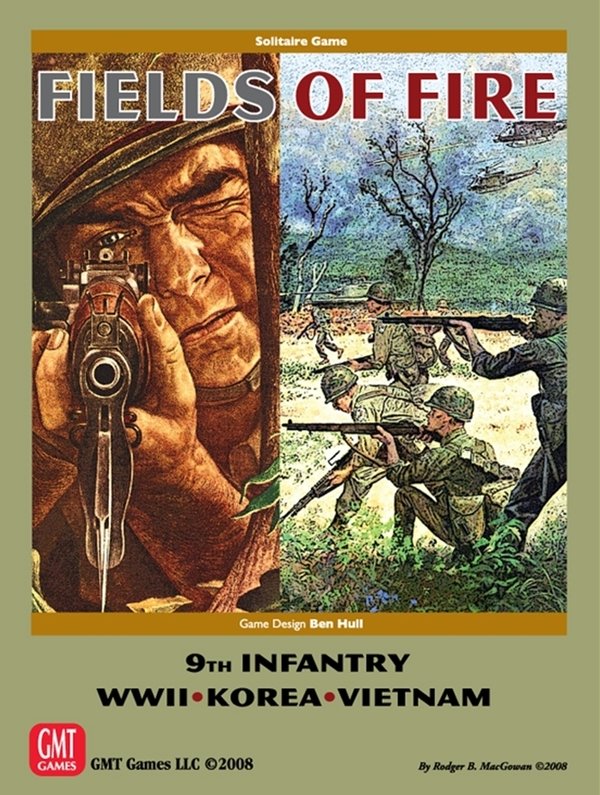 Fields of Fire is a solitaire game of commanding a rifle company between World War II and Present Day. The game is different from many tactical games in that it is diceless and card based. There are two decks used to play. The Terrain Deck is based on a specific region and is used to build a map for the various missions your company must perform. The Action deck serves many purposes in controlling combat, command and control, various activity attempts. The units of the company are counters representing headquarters elements, squads, weapons teams, forward observers, individual vehicles or helicopters. A single playing is a mission and several missions from an historical campaign are strung together for the player to manage experience and replacements. A mission can be played in about 1 – 2 hours.

This game is based on three actual campaigns experienced by units of the 9th US Infantry in World War II, Korea, and Vietnam. “Keep Up the Fire” is the motto of the 9th Infantry, known as the “Manchus” for their service in the Boxer Rebellion.

As part of the 2nd Infantry Division "Indianhead", the 9th Infantry landed on D-Day +1, June 7th 1944. They would spend the next 70 days in the line battling through the bocage terrain. For much of that time they faced the German paratroopers of the 3rd Fallschirmjaeger Division. The Germans used the difficult terrain to their advantage, forcing the Manchus to battle for it hedgerow by hedgerow.

The summer of 1951 saw the 2nd Division taking part in a series of offensive operations in Central Korea, and systematically rolling back Chinese and North Korean forces. In the high rugged hills just to the south of the 38th Parallel, the fighting between August and October was the last major engagement of the war for the Manchus and the rest of the 2nd Infantry Division.

The Fourth of the Ninth, 4/9, Infantry was transferred to the 1st Brigade of the US 25th Infantry Division in 1966 and sailed to the Republic of Vietnam. The Manchus were posted Cu Chi, northwest of Saigon near the base of the infamous "Iron Triangle". They faced some of the toughest Viet Cong fighters in the Filhol Rubber Plantation, Ho Bo, and Bo Loi Woods areas. Later they moved northwest to Tay Ninh to battle North Vietnamese infiltration along the Cambodian border. Working closely with helicopters, the Manchus flew in and out of action routinely.